Sometimes, when I mention that I am going to a comic convention, I get a squint-eyed, suspicious response. “Why?” some people ask, as if I should be home mowing my lawn or doing my taxes.

It’s easy to say, “Because I get to meet fans there, and sign my books!” Because that sounds like a proper, task-oriented reason to attend.

But it’s more than that. I go, well, because:

Yes. That’s us with DARTH VADER. There. What else do I have to say? THIS is why I go to comicons: Because since the first time that Darth Vader strode onto the screen, cape flowing behind him, I wanted to step into that world and face him, and today I did. 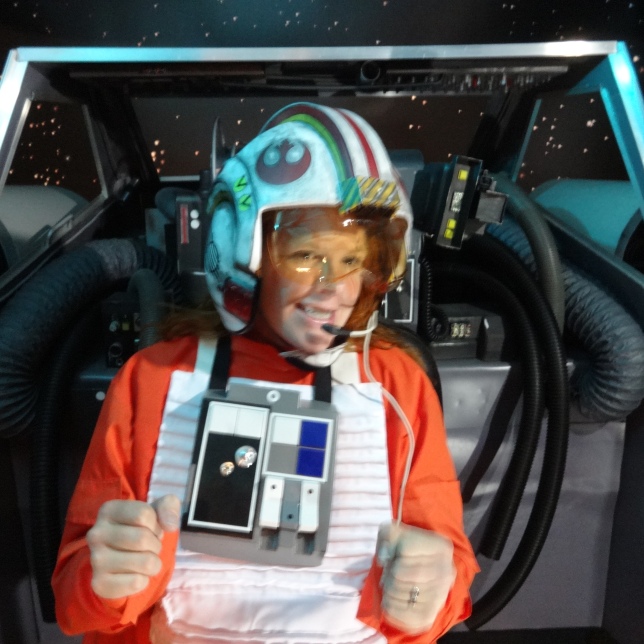 I always wanted to be an action figure!

See me considering decisions of galactic importance? Phaser in hand . . .

When I found those scenes, I got lost with these characters in their stories. They lived for me in those moments, and I dreamed of them for a long time afterward. At a comicon, those stories come alive again. They are brought vividly to life in art and toys and costumes by other people who love them, too.

Anthony Hopkins says in Shadowlands, “We read to know we are not alone.” And at comic conventions, you are anything but alone. The Emerald City Comicon had EIGHTY THOUSAND attendees last year! Cons are busy, bustling places. You are surrounded by people who have been dazzled by the same stories, the same characters, the same adventures, that you have been.

Weaving through what would, anywhere else, be a mundane crowd, you come face-to-face with your heroes, and when you stutter out how awesome their costumes are and how much you love this movie or that book, what you’re really saying is that part of you understands part of them. You’re really saying that you got swept up in that story, too, and that it changed you. You’re thanking them, not just for the effort that went into building that awesome costume, but also for reminding you of the days you spent dreaming.

And there’s a connection, and an appreciation, of something you have long loved. And you’re not, at all, alone.

So to the other 79,999 people who left their lawns unmowed and their taxes undone this weekend:

Get in on new stories, giveaways, and events exclusively for newsletter subscribers!